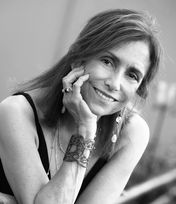 Marilyn Suriani has been making captivating photographs for over 40 years. Her career has produced highly coveted fine art, world class portraits and stunning documentaries. Her work can be found in the permanent collections of museums, corporations, private individuals, and in high profile public spaces world wide.

Suriani has been awarded numerous grants to produce her many documentary studies, including the poignant and inspirational Storefront Churches project featuring small urban congregations. Some of these images are in the permanent collection of the High Museum of Art. Herb Creecy, famous Georgia artist, and Museum of Contemporary Art Atlanta, also has Marilyn's work in their permanent collection. Her Women in Prison documentary focuses on the women and their lives inside. A thirty year study of South Philadelphia is the subject of Suriani's roots. Self Portrait documents Marilyn's life after sixty examining gender, aging, identity and grace.

Dancing Naked in the Material World, Suriani’s in-depth study of exotic dancers, received unanimous praise by critics, the Philadelphia Inquirer calling it “fine urban anthropology”. The book and a New York City gallery exhibit resulted in numerous radio and print interviews and reviews, and a TV show dedicated to her book on Sally Jesse Raphael. Images from this work were displayed in the Deep South exhibition at the International Festival of Arles, France, curated by Gilles Mora, with the work of such notables as Eudora Welty, William Christenberry, Debbie Fleming Caffery and Bruce Davidson.

Throughout Suriani's career Marilyn has created and continues to create large permanent installations. Examples of these include a permanent installation for the 1996 Olympics in Atlanta, "Southern Trinities", depicting life in the south using 4 large mixed media tryptychs in Atlanta's Hartsfield-Jackson International Airport, Gate E-17. Fast forward to 2014 and one of the largest original photographs on glass in Atlanta, " Liquid Emerald", a water image at 10'x28' on glass in lobby of Capital City Plaza on Peachtree Rd in Buckhead. In 2016 another large installation was commissioned in Las Vegas in a newly renovated luxury condominium high rise, "Waterway" , using three large water photos mounted on acrylic equalling 54 linear feet in the lobby corridor.

Suriani was chosen as an artist-in-residence at the L'Ecole Nationale de la Photographie in Arles, France and has been honored by the governor of Georgia for her 'significant contributions to the visual arts'. She was Senior photographer for Atlanta Committee for Olympic Games for three years. Her work continues to be highlighted in national and international magazines and museums.

Marilyn is continuing her work especially at larger sizes. Based on her first large installation using mixed media, she is interested in combining photography with a variety of techniques as she moves forward. She is also embarking on a retrospective of her documentary work, including work never seen, in the south and Atlanta beginning in the 1970’s and 1980’s.